Posted by Believer | Filed under Faith

Have you ever felt that nothing protects you from the mishaps of life?

During my life time  I’ve felt vulnerable only in several occasions.

One that is embedded in my memories would be the day my best friend’s husband called me to tell me that she had been hit by a car and had died almost immediately after.   Words fail to describe how vulnerable I felt during those brief moments.  Pain ripped through my body and soul as I realized that things like this happen, and that they can happen to anyone.

Going down memory lane would have to  be,  the day I was rushed to a nearby hospital and was admitted to the Intensive Care Unit without even having a diagnose of what was happening to me.  I was terribly ill, but doctors couldn’t pinpoint what was wrong with me.

I could have been easily on a House episode during that time.  I was so afraid of dying, my life had been turned around and no longer was I healthy or would be in the near future.

It seemed my life had fallen into a pit, that I no longer controlled the events that were taking place.

I felt the raw vulnerability of a newborn.

I felt naked in a world of dressed people with nothing to protect me from anything or anyone.

When we’re ill our world changes and our independence is lost with so many other things.  We feel that nothing stands between us and life.  All our barriers are gone, leaving nothing left except our bare essence.

It’s like taking a free fall into a bottomless pit.  You just fall suspended in time and space without a notion of what will happen next.

Today as I visited my father-in-law I looked at him and these thoughts crept inside me and left me cold with despair.  He clings on to my mother-in-law,  not wanting to let go because he’s afraid something will happen while she’s gone during every other night she travels home to catch some sleep and do some laundry.  She usually rushes back back with the break of dawn the next morning. 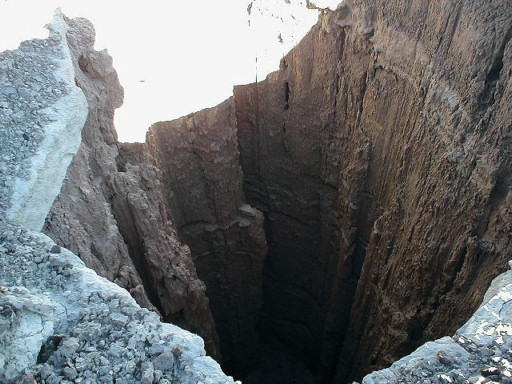 I know exactly how he feels and I really can’t blame him.  He’s not acting up or being selfish for wanting her and her only.  She’s his life line,  the one that protects him from life itself,  she  has become the barrier between him and cancer.

How would you deal with this re-discovered vulnerability? Why do I say it’s re-discovered?  Basically because  we’re born vulnerable and stay this way until we are old enough to face life and begin constructing barriers to protect ourselves.

Do we need to go back to our childhood and just learn to toughen up?

I really don’t have the answers, because each one of us is different.  Each and every one of us deal in different ways with our issues and work around them.

However, who ever will try to cope with vulnerability needs to accept that life sometimes brings on terrible things upon us.

We just need to learn to work ourselves around them in a way that we can learn  to cope with life’s tragedies and pits.

The best part of this all is that after facing our vulnerability we come out stronger.  We pull through without knowing we were strong enough to make it all way down.

Even if we thought that our free fall would last forever the sudden thump of the ground below us makes us realize that we’ve made it through.  The thump hurts like hell, but we’re still alive and struggling to leap on our feet.

I made it through and so many of you too, and I have faith that my beloved father-in-law is also going to make it all way to the bottom to just jump right up and stand once again.

It’s all about embracing our new circumstances and moving on.

Welcoming back our own vulnerabilities as if we were children learning to walk once more.  As a child taking his or her first steps towards a new stage in their lives.

Vulnerability is painful, but at the same time beautiful because we can emerge from it as the phoenix with re-owned strength and courage to face whatever it is we need to.

And that my dear friends is what life is all about!