It’s taken a while, but finally I’ve gotten around writing about Hurricane María.

Today it’s been 128 days since María hit Puerto Rico and the same amount of days we were out of power where I live with my family on the west coast.

In the early days after Maria the immediate future seemed dreadful and full of uncertainties. Rumors spread as lethal as an aggressive form of cancer and it was easy to fall into believing mainly because it seemed we had been sucked in by a black hole.

Our banking and communication systems were down. Nothing seemed to work properly.  Things we had taken for granted for so many years now seemed like part of another time, another life.

Being out of power is a “part of your life” kind of thing here due to the precarious state in which our power system was, so emergency power generators are part of the appliances of our households.  However, it’s a totally different thing when you see all that system on the floor, basically broken to the core.

The sensation of “now we’re in deep trouble” creeped up on me and took me to a totally different level of pure undisguised freight.

To remain with  some form of sanity,  I needed to focus on something,  that something would be the countdown for the day finally our power would be restored.

I had been putting down finishing my journal for some time.  Never found the time (which is by the way an excuse) to get it done.  You know what, suddenly I had all the time in the world.

I would devote a complete section of it to Maria.

I made a list from 1 to 26, these would be the weeks projected for our power to be restored, hence our government was saying to us.  Each week began Tuesday and ended on Wednesday, week number one ended on September 27th, an exact week from the hurricane. 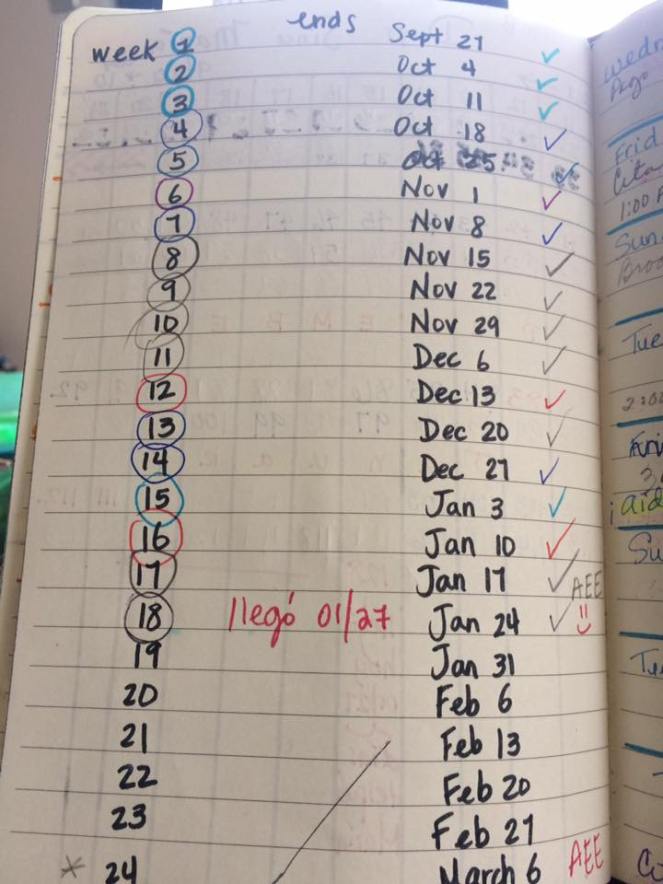 Finally, my count came to an end on week 18.

Power was restored, we are no longer forcibly off the grid.

Now it’s time to face all the questions without answers,

the trauma of thinking food was becoming scarce as I waited in a line outside a supermarket with a list scribbled on a paper thinking about my elderly parents and a six year old waiting for me at home,

the fact that the roads that give us access to the more urban part of the Island were gone,

the fact that gasoline was not available to move those generators and all the other appliances we had,

all our communication systems (land lines, cellular and internet) were also gonners,

and finally having money in the bank meant nothing because there was absolutely no access to it.

It’s time to heal and to move forward and share a thought or two about all that has happened.

But, that’s for another day.