Much has been said about the “turning points” in our lives.  Events that come around us because of something that has happened or someone we have met.

When you think about them, it’s like trying to walk through a maze.

How do we recognize our so-called “turning points”?

The other day as I cruised around channels on my television, I came across J Lo’s so-called story and the people they were interviewing kept on talking about her “turning points”.  Supposedly she had been able to contact Tony Mottola because of the Selena movie, and because of knowing Tony she got to know Marc Anthony, and then was related to Puff Daddy and because of that she got to know Benny Medina….and so and so and so,  the rest is history.  This Puerto Rican girl became a super star, despite what her mama thought.  NO kidding?

Bottom line, all those moments in her life were very important because if none of the above had happened as it did, she wouldn’t be who she is today.  Get the idea here?????

Probably her mom would have made her stay in school, and today she would be a music teacher or something like that, still living in the Bronx and teaching at a nearby school just like her mama.

A pretty familiar picture, if you ask me!!!!

Which makes you think, do these so-called “turning points” really exist?  Or are they simply opportunities that rise for being in the right spot at the right time?

After giving it some thought, I came to the conclusion that our turning points are sometimes to difficult to recognize,  and we don’t want to get out of our comfort zones to face them.  They become a challenges because we have to change our ways, and that’s something almost none of us are willing to do.

Being a History-English major I would often day-dream about the lives of people who lived way before me.  My text books would give me some details about them and I would complete the equation using my over active imagination.

For instance, I’ve thought many times about what possibly would go on Emily Dickinson’s head when she was able to write such beautiful poetry without ever going out and wondering into nature.  Her poems were filled of vivid imagery that  would make you think that the author had experienced it first hand.

What about people who marked the world, making a difference?  What were their turning points?

Some of their stories are told in books, but others remain buried with them forever. 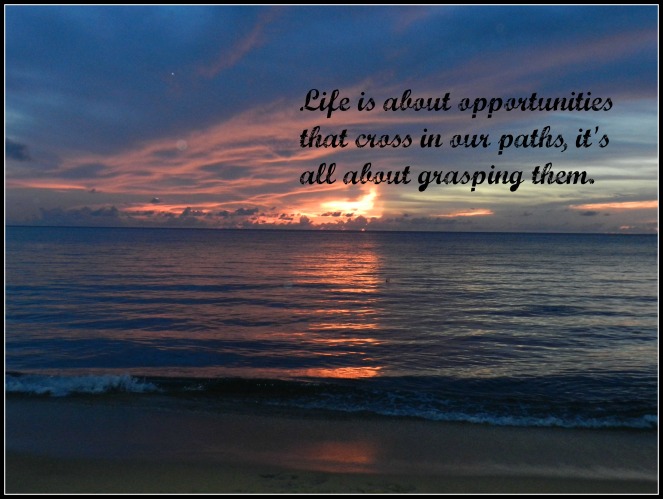 The beauty of this is that all of us have and will continue to face “turning points”,   the important thing here is to be able to recognize the potential they carry and be able to face the challenges they bring with them.

It all about grasping the opportunity and making something out of it.

If something or someone gets you out of your comfort zone, take a second look because that my friend can be your next turning point and you may pass on it without even knowing.

One thought on “Eyes Wide “SHUT” to our Turning Points”